Everything You Need to Know About Crown Act – An Informative Guide 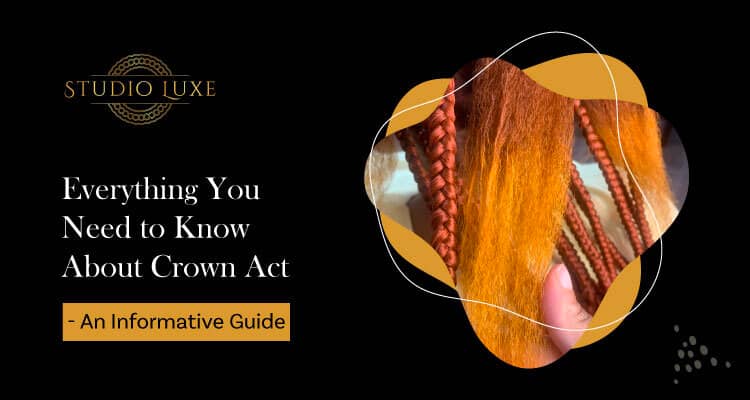 Discrimination is not normal?

Hair isn’t “just hair.”  hair is a crown, and the celebration of hair is deeply woven into history. But often there are several styles like, the coils, locks, and braids we proudly wear are deemed to be “unprofessional” for public spaces. Nowadays Black hair has been unjustifiably policed everywhere, from the workplace to classrooms, for decades. An effort has been done to eliminate hair discrimination, in many cities and states have started passing legislation that addresses this issue.

Routinely employers try to control the professional appearance of their employees. Considering the employment handbooks, in that a personal appearance policy advising employees to be dressed professionally, practice good hygiene, and perhaps hide all offensive tattoos. Some of the litigants have attempted to discredit the policies and bring claims based on appearance discrimination, these lawsuits rarely succeed. So, why would hair be different?

First, California made headlines for becoming the first state that outlaw’s the racial discrimination of individuals based on their natural hairstyles. The bill, SB 188, passed the state Senate in April and passed in a unanimous vote by California’s state assembly on June 27, 2019. The law is also known as the CROWN Act (Create a Respectful and Open Workplace for Natural Hair), states,

The CROWN Act also addresses the United States’ history of anti-Black racism and the failings of the former anti-discrimination council. “The history of our nation is riddled with laws and societal morals that equated” Blackness, and the associated physical traits, for illustration, dark skin, kinky and curled hair to an emblem of inferiority, occasionally subject to separate and unstable treatment,” the bill reads.

“I wore braids in high school in the ’80s without backlash,” says California State Senator Holly J. Mitchell, who authored the CROWN legislation. “I cannot imagine how the trajectory of my life would have changed if my choice to wear my hair natural had not been allowed,” she says. “I reviewed countless court cases lost by Black men and women who were either fired, not hired or failed to receive promotions due to their natural hair.”

The current status of The CROWN Act is in all 50 states and how you can help the CROWN Coalition end hair discrimination in workplaces and schools. Then it’s frequently updating this guide as The CROWN Act legislation progresses in each state.

No discrimination should be done with hairs and that doesn’t make any unprofessionalism. So, the Crown Act should be regulated at all professional places.

To makeover your hair in different textures and styles of braids to be in trends for your fashionable looks among surroundings Studio Luxe By La is the best Hairstylist in the ‘Boro 2019 By the Statesboro Herald, Lasharett has been braiding hair for over a decade.